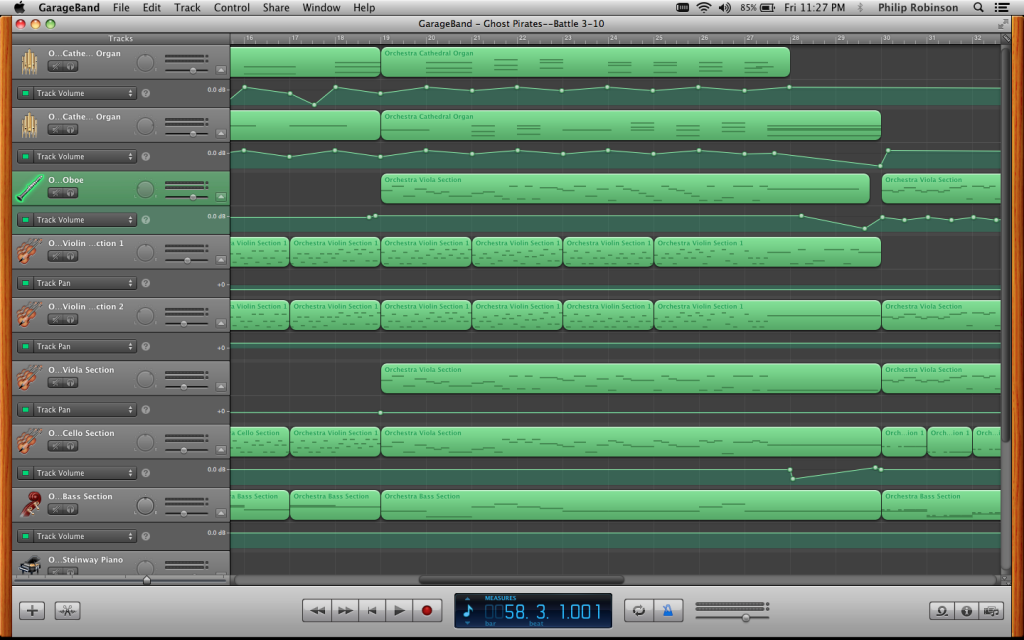 The Story of Pirate Code’s Soundtrack

The story of Pirate Code’s soundtrack actually begins with Super Cell, Circuit Hive’s first game (although technically released by Circuit Hive’s parent company, Green Fire Software). Peter, my older brother, was telling me over the phone all about the game, which was nearly done, back in the spring of 2008. I decided afterwards to write him some boss music…but I didn’t tell him. Just didn’t think to. So when the song was finished a couple weeks later (the demands of my sophomore year of college didn’t leave me a lot of time), I discovered that the game was already done and out – too late for my song. Still, Peter liked the song so much that he bought it from me so that I wouldn’t use it for anything else. (That song, Deadly Trial, is still unused because its orchestral rock stylings really didn’t fit Pirate Code. The music Peter wrote for the gameplay in Super Cell, though, is actually based on a piano song I had written years before, so indirectly I did have a hand that game’s music as well.)

When work commenced on the next game, Peter asked me to write the music for it, which I was happy to do. As Peter said in his yearly retrospectives on Pirate Code’s development, he had never managed a large project like that before and I had never written a game soundtrack, so neither of us really knew what we were doing. We never made a list of tracks that we needed, so I just wrote things as the need arose. That’s definitely not the way to do it. We also didn’t have a schedule for when I should try to submit things, so literally years separate some of the compositions. I also got married in the middle of the development cycle, which further divided my free time but was ultimately good for the project. My wife is my biggest fan and constant source of ideas.

The first thing I tried to do was simply write a piratey song. What I ended up with is what now plays when you’re at an island. I called it Piratical Adventures (and yes, “piratical” is actually a word). It’s something of a pirate waltz and is definitely the simplest song in the soundtrack. It got the ball rolling and gave the team something to listen to. It also made me grapple with what a piratey song sounds like. I didn’t really have a lot to go on other than some movie soundtracks like Pirates of the Caribbean and Cutthroat Island. What I eventually came to was, first, the instrumentation. The songs would be orchestral at their core but certain instruments like accordion, organ, and flute could really help give it that seafaring flavor. Second was a sense of adventure. All the best piratey songs make you want to jump on a ship and sail the oceans blue. The third thing was the use of modes.

Most music today is in either a major key or a minor key, which is basically just a label for the intervals between the notes of a scale. But major and minor are just two possibilities of quite a few. By changing one or more of the intervals in the scale, you can get a completely different sound out of a song. They’re often called the Church Modes because of their extensive use in chant during the middle ages. The Map Song in Pirate Code is a good example. It sounds like it’s in a major key but it’s actually a mode (the Lydian mode, to be exact), which raises the fourth scale degree of a major scale by half a step and really does wonders when shooting for that adventurous feel. The modes, by the way, may not be well known at large anymore but they still get used all the time. You’ll hear a lot of them in Zelda games, for instance. The Lost Woods from Ocarina of Time uses the same Lydian mode as the Map Song in Pirate Code. Another example is the Game Over song, which uses the Dorian mode (similar to minor) to give the song a sad, wistful sound.

My first big accomplishment with the soundtrack was the ghost pirate music. The melody came from a project I did on mixing modes for one of my classes and I thought the end result sounded piratey. I wrote something up in GarageBand (my program of choice…out of financial necessity) and sent it to Peter; he liked it but thought it was too sad for the main characters. Ghost pirates, though, that’s the ticket! If I remember correctly, ghost pirates weren’t part of the plan for the game until that song. So to fit the new ghost pirate motif, I wrote a creepy and mysterious theme for them that could play during story bits. Then I tried to write some battle music using their theme but that proved much more difficult. I scrapped everything and started over at least four times trying to get something that worked. Eventually I had an epiphany and got to work on the version that is now in the game. The optimistic second half of the song was a later addition that came to me while noodling around on the piano instead of doing homework.

The Most Important Music in the Game

The problem was that we didn’t really need ghost pirate music yet. We needed normal battle music and for a long time that was my Moby Dick. Part of it was psychological, I think, because it would be the music that the player heard more than anything else in the game. It needed to be interesting and exciting but not stressful, piratey and adventurous but not annoying. Just starting the song was difficult. Peter and I talked about it a lot and several times he sent back my previews asking for vast revisions. Working with Peter was a great growing experience for me in producing something of quality, not just something passable. He always gave me detailed feedback, even if he wasn’t quite sure what it was he didn’t like about a song. He demanded the best. Finally, I had a draft that was working but seemed to be missing something. I went through and added several more parts to flesh the sound out, including the strings right at the very beginning, which is the part I always hum now. Overall, I’m proud of how it turned out.

Writing boss music turned out to be much easier. An adaption of one of my old piano songs formed the core of the composition but I gave myself a few extra goals. First, I wanted to use more percussion, which had been more or less absent in most of my songs. Second, I wanted to use some brass. The brass in GarageBand, even with the Orchestra Jam Pack, is not very good at all. But I found that if I kept the volume below a certain threshold for the French horn, it wouldn’t get all annoyingly blarey. So with that and enough trial and error with the percussion, I met both my goals in writing Battle with Black Beard.

Another notable song is the theme for Prince Niff. He’s such a funny little character that I knew I wanted him to have his own music. I tried to combine his royal status with his bumbling nature by giving the song a grand introduction with the strings that takes on a more happy-go-lucky melody played by steel drums. Steel drums give off such a wonderful Pacific island vibe. I really think they make the song. I had hopes to do themes for all the characters but it just didn’t work out. Again, there was no pressing need for them.

You’ll hear several other songs in the game, naturally, but the last song I want to mention was also the last one written. The Requiem of the Gate was another difficult song to start. It needed to be grand, ominous, and meaningful. It needed weight. That made organ an easy choice as well as a background choir. There are lots of strings, of course, particularly low ones. Harp and percussion round things out. There is a specific callback to an earlier song, but I’ll leave that you all to discover which one. The most significant decision I made with The Requiem of the Gate, however, was to give it a methodical pace rather than something faster or more fraught with danger. This choice actually rubbed Peter the wrong way when he first listened to it but I was confident enough in what I had that I didn’t send him a preview till the song was basically done. Once he plugged it into the game, though, he found that my approach perfectly fit the way he had staged the battle. He made a few suggestions, I added some things, and we were both happy. That last fight will be daunting, perhaps your darkest hour, but hopefully you have confidence in the fleet you’ve assembled and are ready for the struggle facing you. The music is meant to mirror that determination – that will to win when failure is not an option.

Writing a soundtrack was an incredible experience, one that covers the emotional spectrum from joy to despair and back. I hope at least part of that comes through in the music and will make your piratey journey more memorable. And I can’t wait to write another.