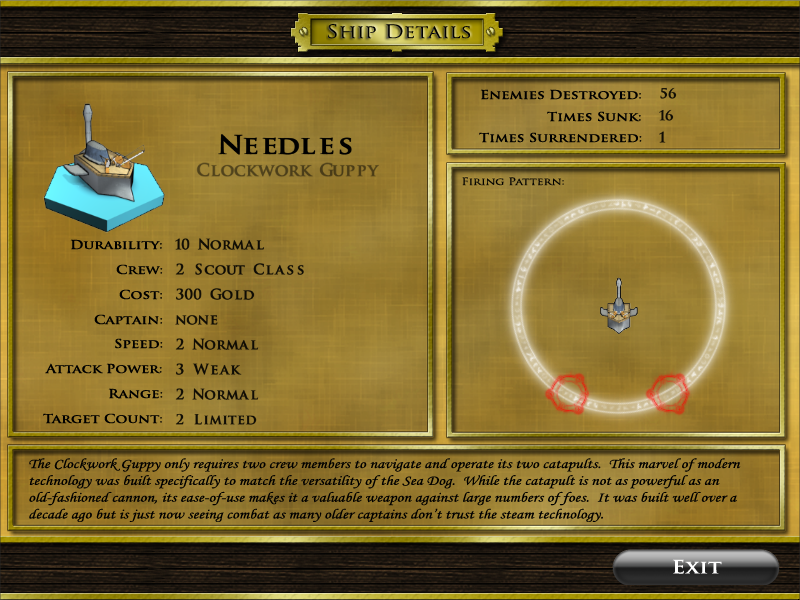 You may think that working on the 3D art in a game is the most enjoyable part of the game making process – and, well – you’d be right.  Still, creating 3D art assets presents a special set of challenges.  During the development of Pirate Code, my responsibility was to design 3D models of the ships in the game.  Although I realize I’m not the best 3D artist in the world, I hope to share some of the challenges I experienced during the process of designing and creating these ships in 3D. To highlight these challenges I’m going to focus on the creation of the first Clockwork ship, the Clockwork Guppy.

When I first started on Pirate Code I hadn’t yet developed a set method of working on a project.  During the trial and error development of ships I learned to create all 3D art in the following process: concept, model, UVW mapping, texture, and render. Let me expand on that.

Concept of course, is the birth place of any creation in 3D. Drawing out a simple concept picture gives clear direction for the artist to start creating. Modeling is the ‘sculpting’ of the model using 3D geometry.  UVW mapping is the layout of the models geometry to a 2D plane where it then is able to have a 2D image projected onto it. That 2D image then becomes the texture of the model. This gives the geometry the illusion that the surface is actually a physical texture, when in fact, it’s just a 2D image being projected on to a shape. The texture can be created in any 2D program such as Photoshop, Gimp and many others. Once the texture is complete we are ready for the final image which in Pirate Code is a 2D image render of each possible frame.  So with all that groundwork out of the way, let’s talk about the Clockwork Guppy! 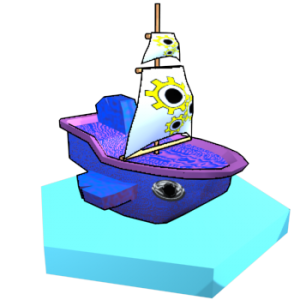 It doesn’t take a lot of imagination to figure out why this never made it into the final game.

“The smallest of all Clockwork ships, the Clockwork Guppy only takes two men to operate just like the Sea Dog. It also has the same range, life, and speed as the Sea Dog, but it has two Catapults on the front (-1, 1).“

As you can tell, pretty vague (sorry Peter, but it’s the truth). It took me over a month to start it and when I finally did I failed to create a concept first. At the time the official name of the clockwork ships was the Blue Whale Trading Company (now referred to as the Clockwork Trading Company).  Based on that name and the description above I ended up with another version of a pirate ship that had what looked like fins of a fish (not proud of that).

After this Peter kindly thanked me for making a starting point and loaded me with up with Steam Punk references. Then he drew concept art for the Clockwork Guppy and its catapult. Thank you Peter! 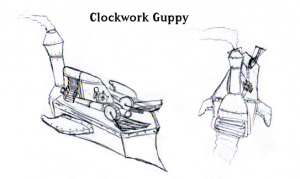 Very similar to the final design, this was the original image Peter drew for the Clockwork Guppy. 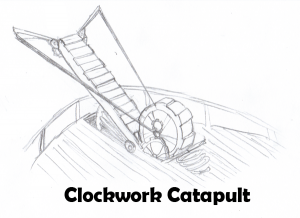 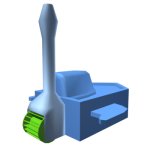 The model of the Clockwork Guppy.

Using the concepts as a guide, I was able to create a model of the ship within a few days.  I used surface tools, spline and the extrude modifier and simple box modeling. For the base of the ship I used box modeling using a simple cube then shaped and edited the geometry to create the bow of the ship. With the steam pipe I used surface tools, using splines to create the exact shape I needed.  Surface tools are great for that!  Finally, the fins on the side of the ship were simple spline shapes extruded, pretty easy. Then I UVW’d the ship making sure the UV’s were flattened properly on its 2D plane so I could then add the texture. The catapult was made using splines and simple extrusion, (I love splines) and box modeling.

I was then ready to texture, which I did in Photoshop using various reference pictures and manipulating them in various ways with filters, layer effects and styles.

Different textures that were used to create the Clockwork Guppy.

After the texture I applied the Toon Shader, which gave it the outline. I had a big challenge with this because at different angles it would give me extra lines that made the model look not so great. I searched the Internet for a plugin shader, but couldn’t come up with one that worked for us better than the default.  In the end I stuck with the original Toon Shader and worked out the problems by manipulating the model or touching up the final render in Photoshop.

Once I got the shader down, I started the rendering process. For the in-game sprites, Peter requested 6 different angled renders. To work with the tiles which were hexagons, six renders work best. This process was slow at first, but after a few ships I was able to get down a system where instead of rotating the camera, I rotated the ships 6 different times to get the correct angled renders. I also with the Green Gill and Red Crab ships started using Mental Ray which I believe gave me better smoother results in my renders. 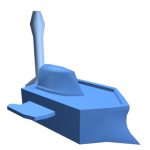 As the first Clockwork ship, the Guppy set the bar high for the rest of the designs. 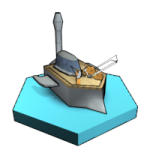 Modern steam power at its finest!

So as you can see, creating 3D art can be a lot of work! Sure it’s cool because you’re creating the main assets of the game, but it’s also a process that can present many challenges. But like everything, if you do it repeatedly you get pretty good at it.

So if you’re an aspiring 3D artist, I encourage you to keep at it and join a community like polycount.com and hone your skills. And if you just enjoy 3D art in general, pick-up some games with 3D art that you like and support the artists that create it.

Thanks for the read!