The Undercurrent of Excitement

Our final year of development on Pirate Code was a natural extension of the previous year.  2012 had ended with low morale despite an ever smaller amount of work to do.  The final chapter of the campaign was the major ticket item to complete.  As I moved forward a strange undercurrent of excitement started resonating through the team. 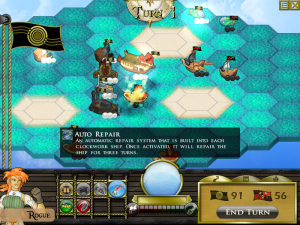 Just as we had envisioned it years ago, Pirate Code offers a wide range of ships, actions, and maps.

By May of 2013 I had everything finished except the boss of the game.  Oddly enough it’s at this point that I broke through the wall.  My weekly times suddenly spiked from 5 hours or less to around 20 hours.  Looking back on this phenomenon, I can’t explain why this happened.  It’s not really true that I had more free time at this point.  It seems more likely that as the game neared completion, the excitement caused my production to snowball.  Regardless of why this happened, I was suddenly working as much on Pirate Code in one week as I had been doing in a whole month before.

But creating the boss of the game would not be easy.  There were special graphics, actions, dialog, and even music to work on.  With my new-found energy I spent a full month on this one battle and by June I had finished it.  I created an installer and handed it over to my team for testing.  Our excitement shot through the roof!  After over five years of development we finally had a completed version of what we had created in 2008.  There were still a few major items to complete though.  I started adding sound effects to the game and fixing bugs as they came up.  There was also the locking and registration code to write.  A few unexpected items also came up like full screen support.  The game had originally been designed using a standard aspect ratio and running it in full screen stretched the game on widescreen monitors.  Finally, the “update” button was added to the game and the game credits where created.  It wasn’t until August that I could finally declare the game done.

But there was still more to do.  I had to fill out the legal paperwork for our game company, create the company logo and website, get a payment provider, and create the needed forms and database for registering the game.  I created this blog, social networking accounts, and press packages.  September came and I spent most of the month creating a game trailer.  By the end of September it was time to set a release date.  I picked October 22nd.  The final weeks leading up to this date was a flurry of website development, bug fixes and press releases.

Finally the date arrived and at midnight I made the game link available.  Pirate Code represents well over 2000 hours of collective work by our team.  Although the majority of its features had only taken a month to imagine, realizing that vision had taken years.  Dedication and hard work had overcome the various challenges that faced us during development, but the battle was only half over.  Now we face the greater challenge of marketing our game.  There are many gamers out there who will love Pirate Code and its unique twist on traditional strategy.  Our final task is to find those players and convince them to give Pirate Code a chance.  For now, Pirate Code is complete and I can sleep a little better at night.