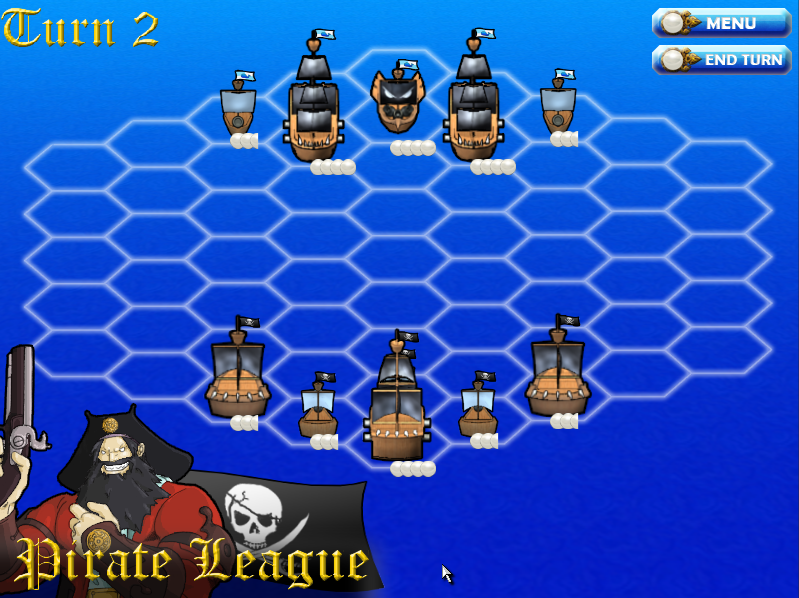 History of Pirate Code: Year One

Pirate Code is an epic pirate strategy game made by a group of indie developers.  Like any good indie game, Pirate Code had to pass through the fire to reach completion.  It took over five years to make Pirate Code and at several points it was very near death.  I’m Peter Robinson, the creator of Pirate Code.  I’d like to paint myself as the hero of this story since it was my ridiculous stubbornness that really kept the project alive, but the reality is that the mistakes that led to those near-death situations were also mine.  In many ways the History of Pirate Code reads like a text-book example of everything not do while managing a project.  Pirate Code survived these problems because it was genuinely fun to play.  This is the story of its creation.

Birth of a Pirate Game

It’s hard to place an exact starting date on Pirate Code.  We finished our first game, Super Cell, in March of 2008.  Super Cell was a modest game that I had coded with the help of two artists, Eli Ramos and Robert Morris.  We dodged all the pitfalls that I knew to avoid such as feature creep and the magical man-month (I’ll come back to those).  We built the whole game in about six months and I was eager to churn out another game.  My plan was simple: make a smaller game in 3 months.  Seemed like a solid plan.  Not wanting to appear like a tyrannical dictator, I decided to ask the team what game they wanted to make.  All they needed to do was give me a design document and we would build it.

This is what Pirate Code looked like in 2008. Radar Alert was supposed to be a Battleship clone with moving ships. It didn’t make much sense at the time either.

That was mistake number one.  I turned control of the group over to the group.  In management they call that Group Think.  Having a group without a leader make a decision is a bad idea because groups don’t make good decisions.  In fact, they usually choose the worst possible solution.  We were no different.  Robert came back to me with a design document for a battleship game.  Now, I like battleship.  There’s a fair amount of strategy that goes into placing your ship.  You need to get into the other player’s mind to decide where he would place his ships.  It’s simple, yet fun.  Robert decided to give it a twist though.  In this battleship you can move the ships around.  I should have said “no”.  Battleship isn’t really possible if the ships move.

Despite that little problem we moved ahead.  I created some private forums on the website so we could communicate.  We were adding some new team members for this game.  Brian Everts, another excellent artist would be specializing in the user interface and my brother Philip Robinson would be writing the music.  I quickly got to work on streamlining the design document.  I pulled out a number of useless ideas and stuck in new useless ideas.  I say useless because we still had moving ships and the whole game just doesn’t work with moving ships.  On April 12, 2008 I announced the official start of development using the completed design document.  We called the game Radar Alert.  I put out a plan to have the game done in three months.  Everything was great, but I wasn’t happy with the design, so I started adding features.  First, I added the idea of multiple navies which would allow different kinds of ships.  This allowed us to add a story to the game which meant a campaign.  Players could even create their own navy with a custom flag.  Everyone thought this was great.  Looking back on it I think it’s terrible!  I had just ballooned the size of the game from 3 months to two years.  It also didn’t look anything like battleship anymore.  We call this mistake feature creep and it was only going to get worse.

Radar Alert 0.1 was done by May 1st.  We were making great time.  Then came a rejection letter from Big Fish Games.  They had rejected Super Cell, our first game.  Although they thought it was a great game, it just wasn’t casual enough for their audience.  This made sense.  We weren’t casual gamers so we didn’t make casual games.  No problem there.  But the casual game market was exploding so I decided we needed to make games that were more casual.  Trying to make games that we didn’t really like would be our third mistake. 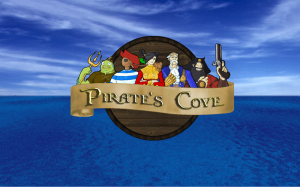 We wanted to call the game Pirate Cove at first. Later, we realized that everything was named Pirate Cove – borad games, toys, water parks, the list goes on…

May of 2008 was really the month Pirate Code was born.  My brother had written some very piratey music for the title screen of Radar Alert and we wanted to make something casual so we all agreed to change the game to a pirate game with a customizable avatar and fleet.  I guess this is mostly because customizable in our minds meant casual.  But again, since none of us really liked casual games we didn’t really know what we were doing.  We were brainstorming like crazy and throwing in every idea we could.  What we were really creating was a huge, complex strategy game which we would like – not a casual game.  Most of the features that are now in Pirate Code were dreamed up during the first few days of May – features that would take years to implement.  This was feature creep on a colossal scale and in the back of my head I knew it was bad.  But I just told myself we were brain storming and moved on.  Shortly after this Robert left the team, angry that we didn’t want to build a battleship clone anymore.  We replaced him with our character artist Phil N.

The stage was set.  We had designed a massive “casual” pirate game and we had a team of five talented people to build it with.  We had only wasted a month or two on the battleship idea.  We started churning out ship artwork, flags, character designs and user interface layouts.  May and June quickly flew by.  I spent the time building a working prototype of the battle system.  It turned out to be pretty fun but was also ripe with complicated strategy and I was starting to realize that this game was anything but casual.  I asked the team if they thought we should stay the course, make it more casual, or give up on the casual idea all together.  We chose the last option.  We decided we should make the games we love to play.  Looking back I still feel that’s true, but that meant redesigning the game again.

The rest of the year we spent hard at work on the game.  We finished the first two fleets of the game (of seven planned).  We built a level editor and worked on flushing out the battles.  Characters where created and music was written but by the end of the year the team was growing quiet and although we had done a lot, we were nowhere near finished with the game.  We didn’t know it at the time, but we were sailing into a very stormy year two. 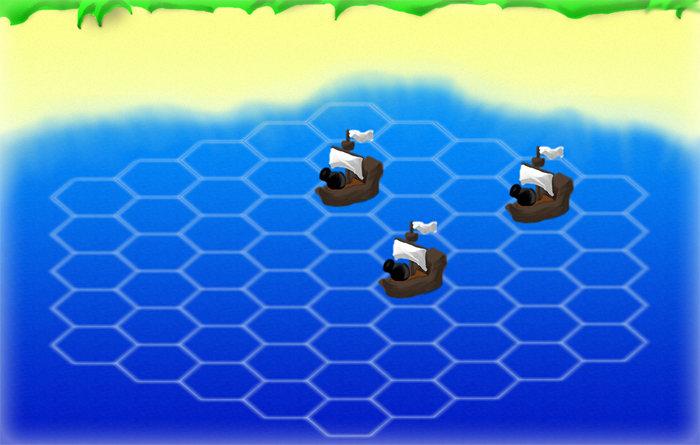 I created this image when I first decided to do a hexagon grid early in May of 2008.

This was our first in-game shot of Pirate Code. It featured the new hexagon map, five different ships and little character artwork. 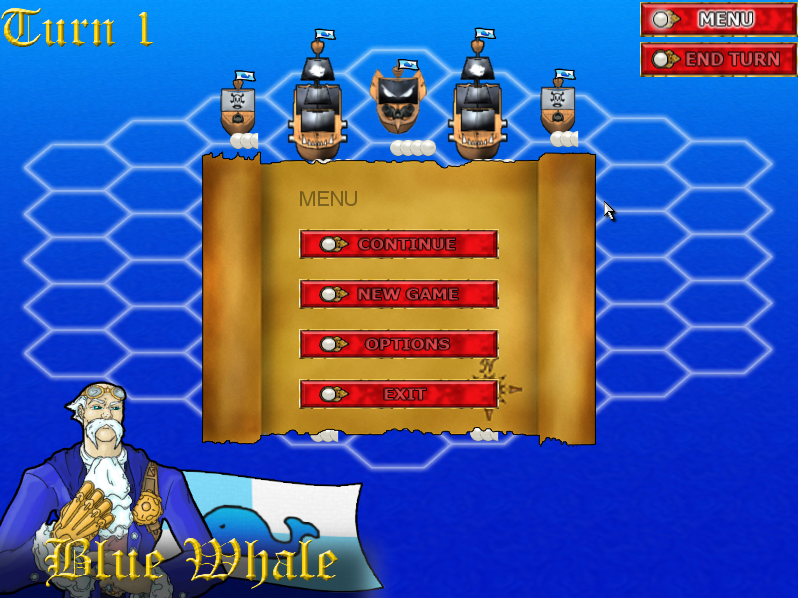 Here is the original menu in the first version of Pirate Code.

Our very first version of Pirate Code set the ground work for what was to come.  The whole team agreed that the game was fun but we also realized the game wasn’t casual.  We decided to run with it.  Brian wasn’t satisfied with the user interface. 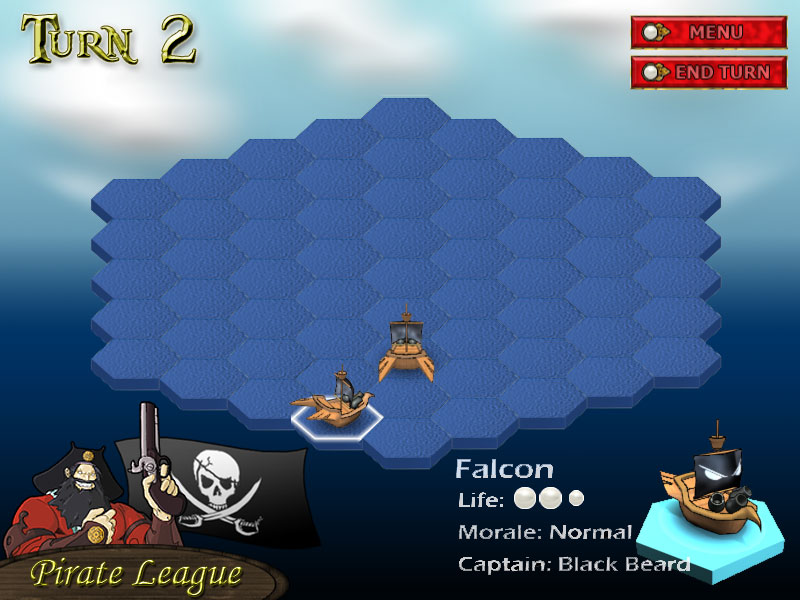 Brian suggested we use tiles instead of a grid. Although they’re technically the same thing, tiles look a lot better. 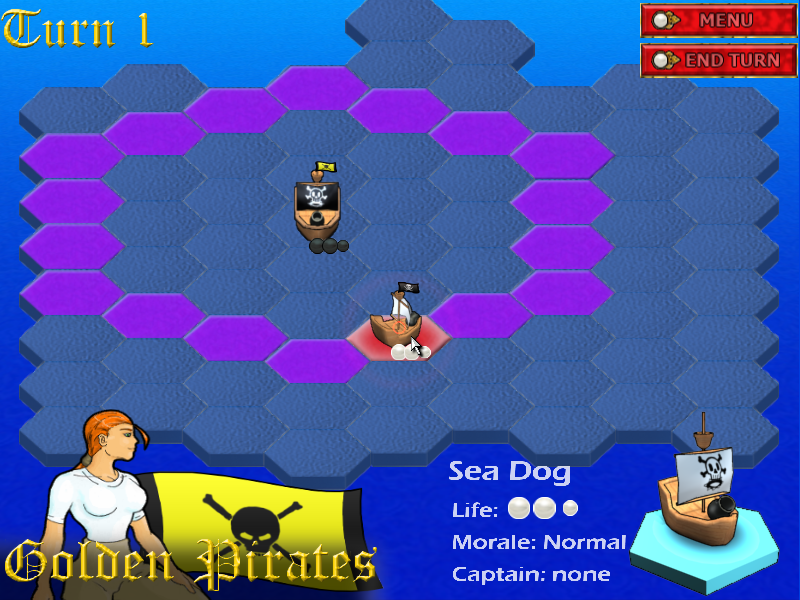 Now that we were using tiles we could make maps with different shapes, adding another layer of complexity. 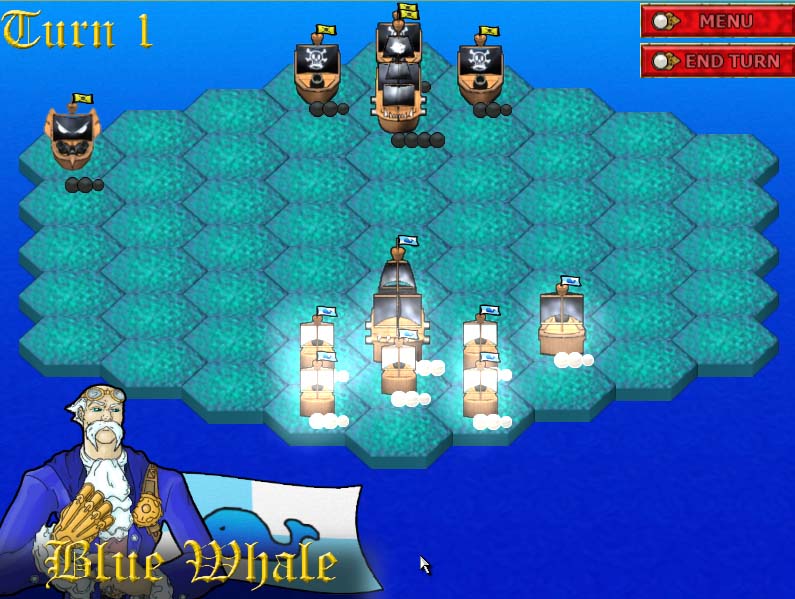 By September we had the game running on the new tiles. 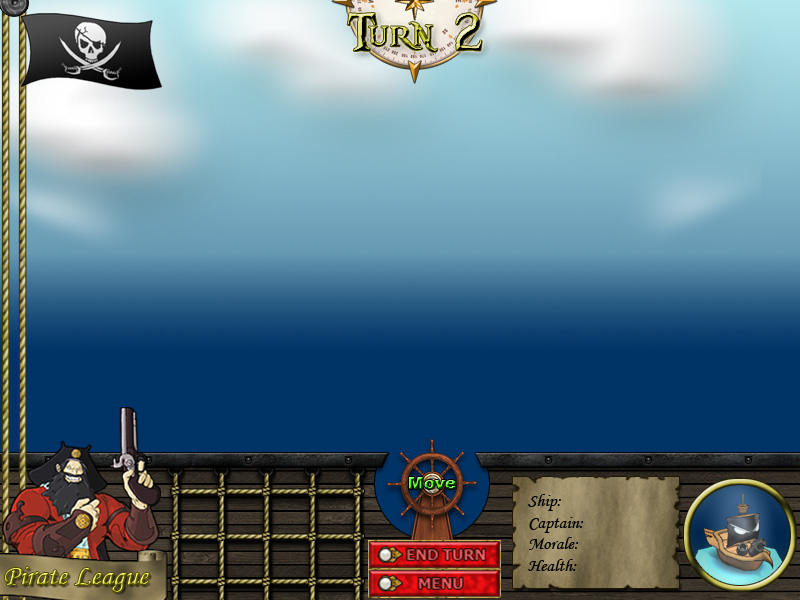 This was Brian’s 3rd user interface for battles. Many of the elements that he created here are still used in the final interface today.

I suggested we make land tiles in October. 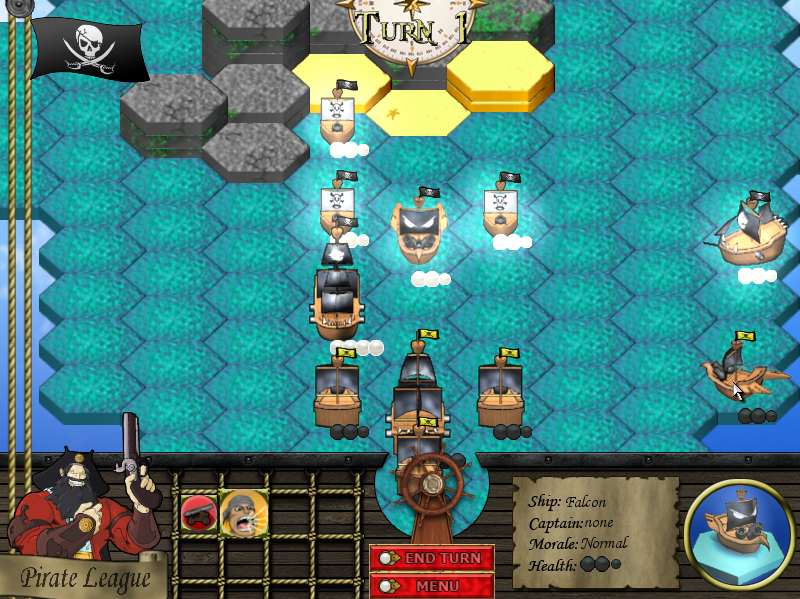 By December of 2008 we had a game that looks very similar to the final game. Still, the user interface would go through several more iterations before it was complete.

There’s trouble up ahead! Find out what happens next in The History of Pirate Code: Year Two.