Pirate Code was in a good place going into 2012.  We had nearly every screen and nearly all the graphics complete.  All that was left was the campaign and several loose ends.  Since I was writing the campaign and I was doing the programming that meant that the entire load was now on me.  So although Pirate Code was looking great, team morale was at an all-time low.  Now, not all indie teams run entirely on morale.  Some indie teams have saved up a year of support and have struck out on their own.  Others have previous games that they are using to support themselves.  Basically, some indie teams have some money.  We were bootstrapping which is an entrepreneurial term for still working other jobs for financial support.  Our team ran entirely on morale.  Since I was the only one who had any work to do my team was having a hard time staying connected. 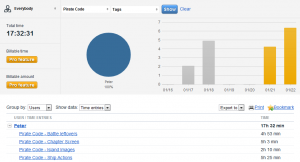 I reported my time with a graph every Monday. This was a healthy week from January in 2012.

My first goal for the year was getting a release out with the second chapter completed again.  Each week, on Monday, I reported to the team how much time I had spent on the game.  By May I had the release out.  Chapter two of the campaign was back!  I had also finished all of the ship actions in the game – a feat in itself.  Eli and Brian went to work play testing and found enough bugs and balancing issues to keep me too busy to get to chapter three.  Our next release was in August of 2012 and contained only bug fixes.

Trudging Through the Desert

A typical week from October. Knowing that I would have to show my time kept me motivated.

At this point my weekly time had really started to suffer.  I had gone from around 15 to 20 hours a week to around 8 hours a week.  I pressed ahead and finished the third chapter of the campaign by the end of September.  Morale was suffering and this time when I released I was several weeks before anyone even tried it.  As a result, October proved to be a very low month for development and my times fell to below 5 hours a week.  This is where tracking and reporting my times really proved to be valuable.  I have no doubt in my mind that I would have stopped working entirely on my game if I didn’t have to report my time every week.  But my team had worked so hard over the last few years that I didn’t want to let them down, so every week I sat down and worked on my game – even if it was only for a few hours.  Tracking my time literally kept the project alive at this point.  After over four years of development and with still a large portion of the campaign to go, finishing Pirate Code had become an insurmountable task.  Like a person trudging through the Sahara I kept going – barely alive but unwilling to stop.

By December I had finished the fourth chapter of the campaign.  With only one chapter to go I was cautiously optimistic that 2013 would be the year that we finally finished Pirate Code.

Read the exciting conclusion in The History of Pirate Code: Year Six!