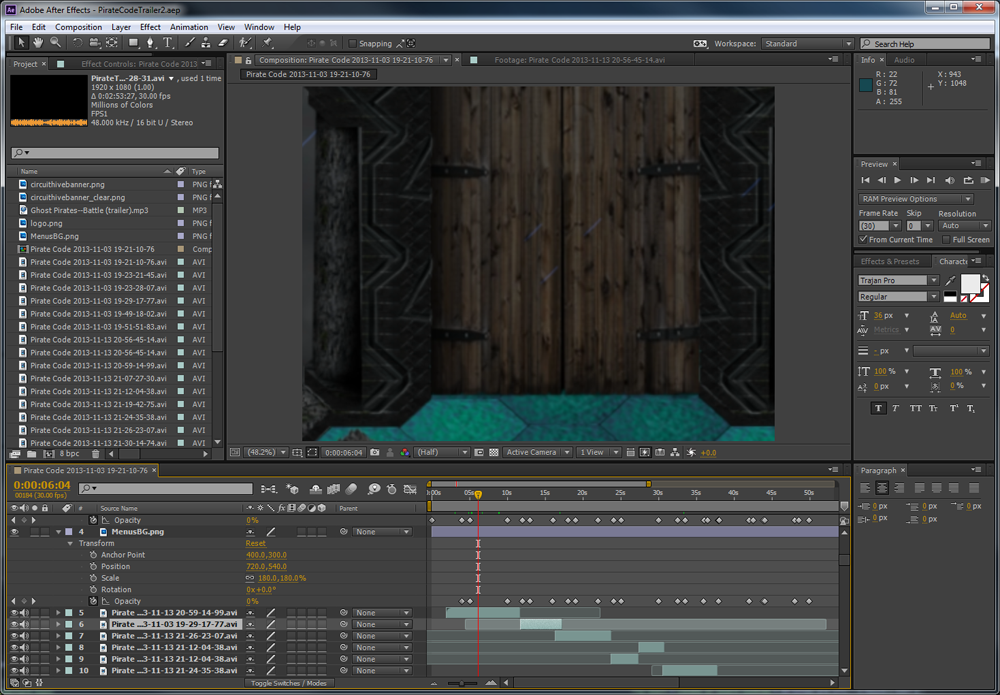 We just released our second trailer for Pirate Code.  The first trailer took three weeks to make.  Just figuring out how to record and edit video was painful enough.  I also scraped my way through several hundred articles on writing good game trailers.  Well, maybe a dozen – but I read slowly.  My point is that I spent a lot of time studying how to do a really good game trailer.  Along the way I picked up a lot of good information.  For instance, I made both of our trailers using Adobe After Effects and before reading about it I had no idea what it was really for.  Having used it on two trailers I can now say that it is perfect for game trailers since you can work still images directly into the trailer.

Unfortunately I also got some bad advice – or maybe I used some good advice the wrong way.  As a result I had to make a second trailer that could correct the mistakes of the first.  The first piece of bad advice I received was to avoid the large text between scenes.  The example given was always “In a world where…” or “One man struggling against the odds…”  You get the idea.  My original idea was to essentially tell my story using these text screens (see my second trailer for what I had in mind), but I was persuaded to avoid this and as a result, my first trailer had no context.

The second piece of bad advice I received was to focus on one aspect of the game.  This still might be good advice but for Pirate Code is failed miserably.  I focused my first trailer on the battles in the game.  I started getting feedback about the game being a simple flash game.  I tried to argue that there was a very huge story supporting the battles but my trailer was not helping.  Nobody could see the story because my trailer didn’t show it.  I also received remarks about the strategy being simplistic.  Again, I had failed to show all the menus where you purchase ships and organize the fleet.  The trailer lacked the depth that people wanted.

As if these two mistakes weren’t bad enough I also made the decision to hide the good stuff.  Most notably I didn’t want to show the gate which comes directly from the boss of the game battle.  The problem is the gate is central to the entire plot of the game and is probably one of the cooler things I could show.  I also didn’t want to show the real bad guy.  Basically I didn’t want any spoilers in the trailer.  I changed my tune on this after watching a few hundred other game trailers.  I quickly realized that showing massive boss battles was normal – even if it did ruin the surprise.  After all, if the game looks boring then nobody will play it and there will be nobody to ruin the surprise for.

I’m happy to say that the new trailer fixes the problems.  I pull out all the stops and hold nothing back.  I show – if only for an instant – every major aspect of the game and I think I nailed it.  What do you think?