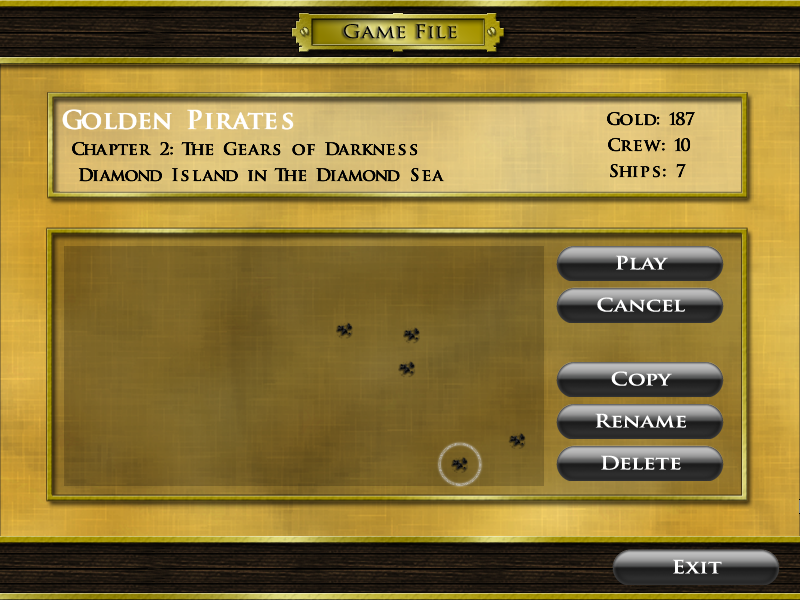 The most recent release of Pirate Code (1.0.5) included a big update to the file screen.  It gave me a chance to ponder what it really takes to make a great file screen.  I think the new file screen is much better than the old one and hopefully I can explain why.

Above all else, the most important functionality of the file screen is to display the percent of the game complete.  When I first designed the file screen, I centered my attention on the name of the file – which in this case was the name of the fleet.  My reason was simply to allow two people playing through the game on the same computer to have fleets by different names and thereby easily distinguish between the two files.  I still think this is pretty important but it becomes useless to most players who only have one file going.  The new design features the percentage  complete posted prominently in the top left corner of the file.  This quickly becomes a motivating factor for the player to keep completing side missions.  Moving that percentage toward 100 has been a personal obsession I’ve had with many games.

Often, when a game involves a huge world to explore with lot of side missions to complete, the developer needs to do a lot to keep the player motivated.  I never really realized what a motivator the file screen could be, but once I added the percent it occurred to me that I could do more to motivate the player to find everything – a lot more!  On the right hand of the file, the old screen had three stats for the file: gold, crew, and ships.  I had chosen these three stats to once again help differentiate between two files.  That was ye olde design.  The new design was focused on motivation.  Gold was a terrible motivator because it had nothing to do with beating the game and had no set goal to reach.  The same could be said of the number of ships you own.  After all, you can sell old ships so in theory you could keep the number of ships down while playing through the whole game.  So seeing gold and ships owned was not a good way to measure progress.  I decided to replace these two with missions completed and ships unlocked.  Both of these new items, along with the crew, where stats that had a maximum amount that could be reached by progressing through the game.

The idea of showing a number that grows as you progress gave me another great idea: progress bars.  I love progress bars and I decided to pepper the file screen with them.  I placed a progress bar under each stat.  This served two important functions.  First, it allows the player to see what the maximum value is and it gives them instant visual feedback on how close they are to reaching the maximum.  More importantly it’s extremely motivating.  But I had one more trick up my sleeve.  I wanted to show demo users where the demo ended so that they could know if they’d found everything the demo had to offer, so for demo users only I placed little red lines across the bar to mark off visually how far they could get.  Besides allowing demo users to see that they haven’t found every ship, it also gave an idea to the prospective customer of just how big the game was.  There’s clearly a lot of missions and ships that they’ll never see if the don’t buy the game.

When the game file is clicked it takes you to another screen that shows the map.  When I looked at this I realized that there was another stat just waiting to motivate – the number of islands discovered.  So I shrunk down the map and placed the stat under the map with a progress bar.  But when I shrunk the map I also made space on the sides of the map.  I needed something to fill that space.  That’s when the last stat hit me – the number of captains unlocked!  I added captain badges to the side with question marks for the missing captains.  It added some much needed color.  At last the new file screen was complete and it gives the player all the information needed for the player to gauge his or her progress through the game. 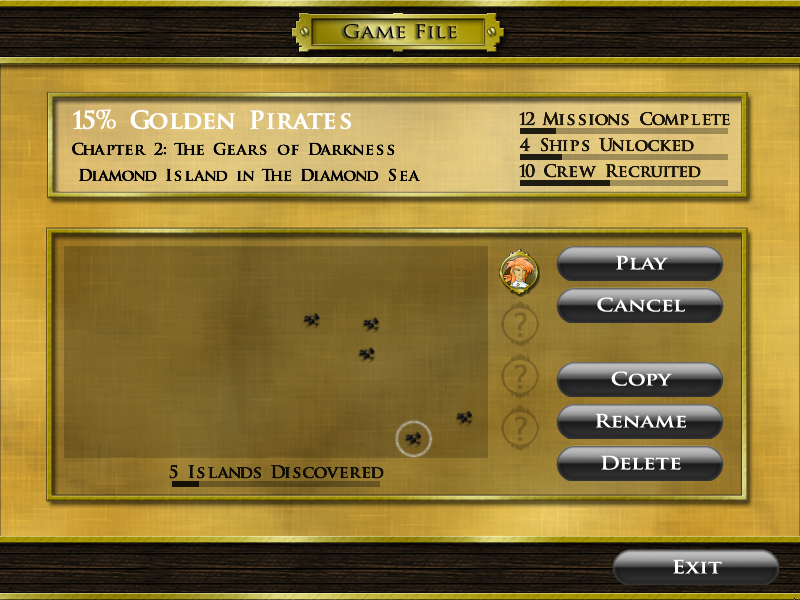 I like it. You definitely get the feeling of progression here. It makes me think with the status bars, “What else could be out there that I may be missing?” Thumbs up!